Sign the petition below and tell your MP to vote YES. 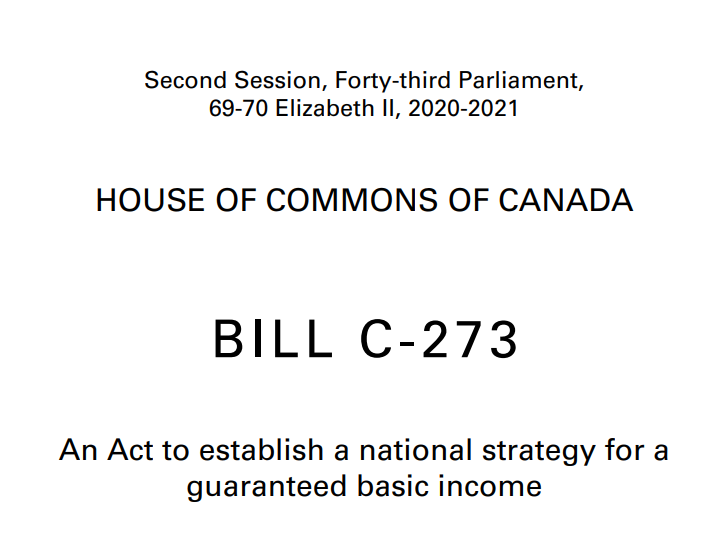 “as part of Canada’s innovation and economic growth strategy...

On February 22, 2021, Member of Parliament Julie Dzerowicz introduced Bill C-273, our first ever bill towards a national Guaranteed Basic Income.

It's step one for the Canadian government to create a national Basic Income by answering important questions on how to best design and implement it across Canada.
‍

Bill C-273 requires Finance Minister Chrystia Freeland to create a national strategy for a Guaranteed Basic Income, including potential partnerships with provinces to determine how best to structure and implement a Basic Income.

The bill includes support for dedicated Basic Income research into: how it would affect the efficiency of government; how it could support entrepreneurship, job creation, and civic action in a new economy; and how it would impact Canadians and our communities.

The bill also calls for a set of national standards to guide the design and implementation of Basic Income across Canada.
‍

Step 1: Sign and share this petition and email your MP to vote YES.
Step 2: Tweet your MP using the tool below the petition.
Step 3: Write a letter to your local editor and ask them to cover Bill C-273.
‍

To read the full text of the bill: An Act to establish a national strategy for a guaranteed basic income.
‍

‍MP Leah Gazan is using a Private Member’s Motion. Motion 46 for a Guaranteed Livable Basic Income was introduced in August of 2020 but has not yet been brought for debate or vote. A motion is a resolution and calls on the government to take a specific course of action. If the motion gets more than 50% of MPs to vote YES on it, it becomes an official opinion of the House.

Motions are non-binding, have shorter debates, and only require the approval of MPs (not Senators too) so they can be passed relatively quickly. If Motion 46 is passed, it would mean that it is the official position of the House that the government should introduce legislation to replace the Canada Emergency Response Benefit with a permanent guaranteed livable basic income; but the government is not required to do anything from the motion.
‍
C-273

‍MP Julie Dzerowicz is using a Private Member’s Bill. A bill is a draft law. Because of this, it needs to pass both the House and the Senate and requires a longer debate process. If the bill gets more that 50% of MPs to vote YES on it, it will become the law.

If Bill C-273 is passed, it would require the Minister of Finance to prepare a strategy for assessing models of implementing Basic Income and then report to the House on the results of this strategy in each province; but C-273 itself can’t fund the implementation of this strategy.

On the surface, M-46 and C-273 have major differences and represent different tactics and philosophies about how to pressure the government to move forward on Basic Income. UBI Works has advocated for both and believes that if you are a Basic Income supporter, each of these initiatives and their champions deserve your support.

Bill C-273 is introduced in the House of Commons.

MPs debate Bill C-273, ask questions, and vote on whether to bring it to committee.

The bill is sent to committee, where it may be revised and amended with the help of testimonies from experts.

The committee sends the bill back to the House of Commons where all MPs can debate it and suggest more changes.

The bill is debated one last time and then MPs vote on it. If it receives 50% + 1 vote, it's as good as passed.

The bill goes through a similar process in the Senate, but much faster. The Senate usually won't vote down a bill which MPs have passed, but may suggest changes.

The Governor General signs the bill into law!

Now the hard work begins to get Bill #C273 through the House of Commons with support from all sides! #cdnpoli pic.twitter.com/lsCacRRcbA

This is a BIG deal. Canada now has an actual bill for a basic income guarantee in Canada! This isn't a motion. This is actual legislation as proposed by @JulieDzerowicz. If you live in Canada, you can let your MP know they should support C-273! @ubi_workshttps://t.co/aHn6eJTM4S

Proud to support my colleague @JulieDzerowicz's PMB "C-273: An Act to Establish a National Strategy for a Guaranteed Basic Income".
A basic income has the potential to lift many Canadians out of poverty and provide them with the stability they need to reach their full potential. pic.twitter.com/4hkhURs611

It's time we take a serious look at what a UBI can do reduce poverty, support economic growth, & ensure every Canadian has their basic needs met. pic.twitter.com/OwDpWIuIUc

Thank you @MarkGerretsen for pledging to support Bill C-273 - "An Act to establish a national strategy for a guaranteed basic income".
"I am supportive of Bill C-273, and will be voting in favour of this Bill when the time comes."#CanPoli #UBI #GBI pic.twitter.com/zSZBiDoKtA

Sign the Petition for Bill C-273
How Would Basic Income Help Canada?

A new report by the Canadian Centre for Economic Analysis (CANCEA) gives us a first ever look at the economic impacts of a national Basic Income in Canada.

1. Basic Income can grow the economy and create jobs. 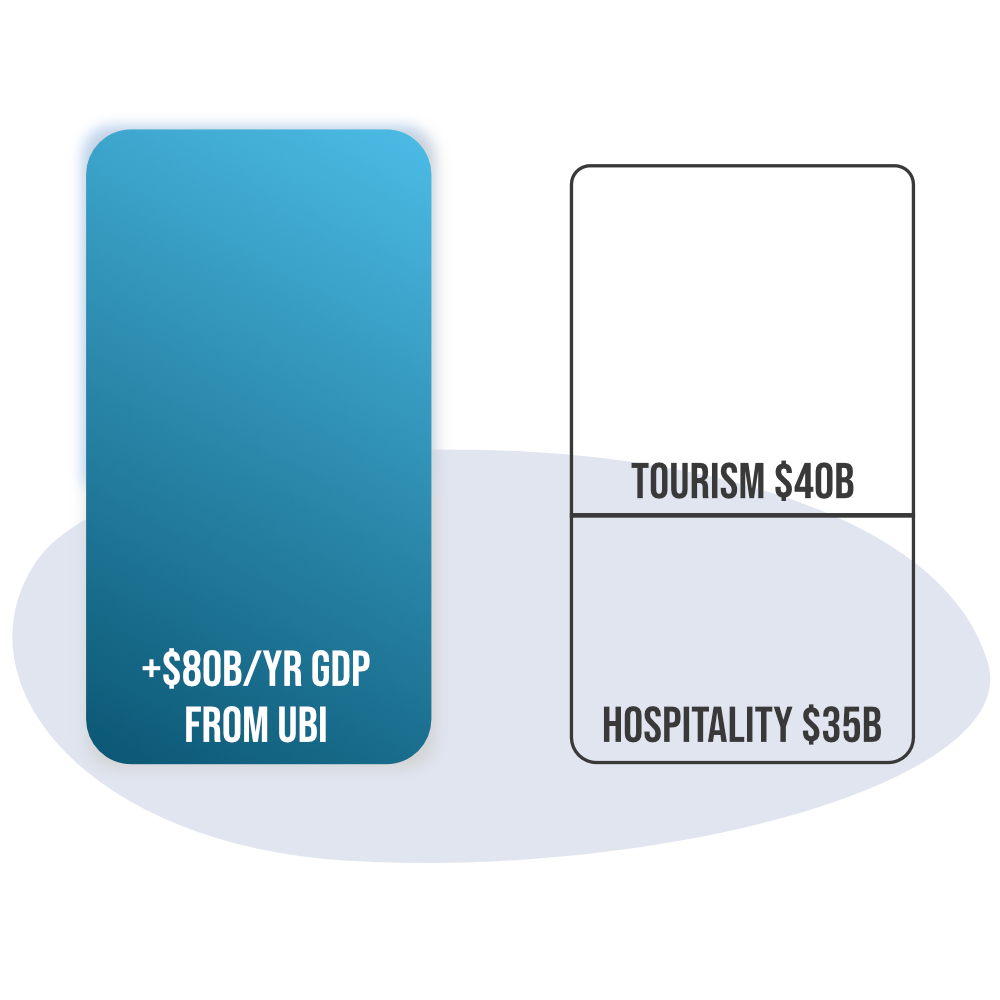 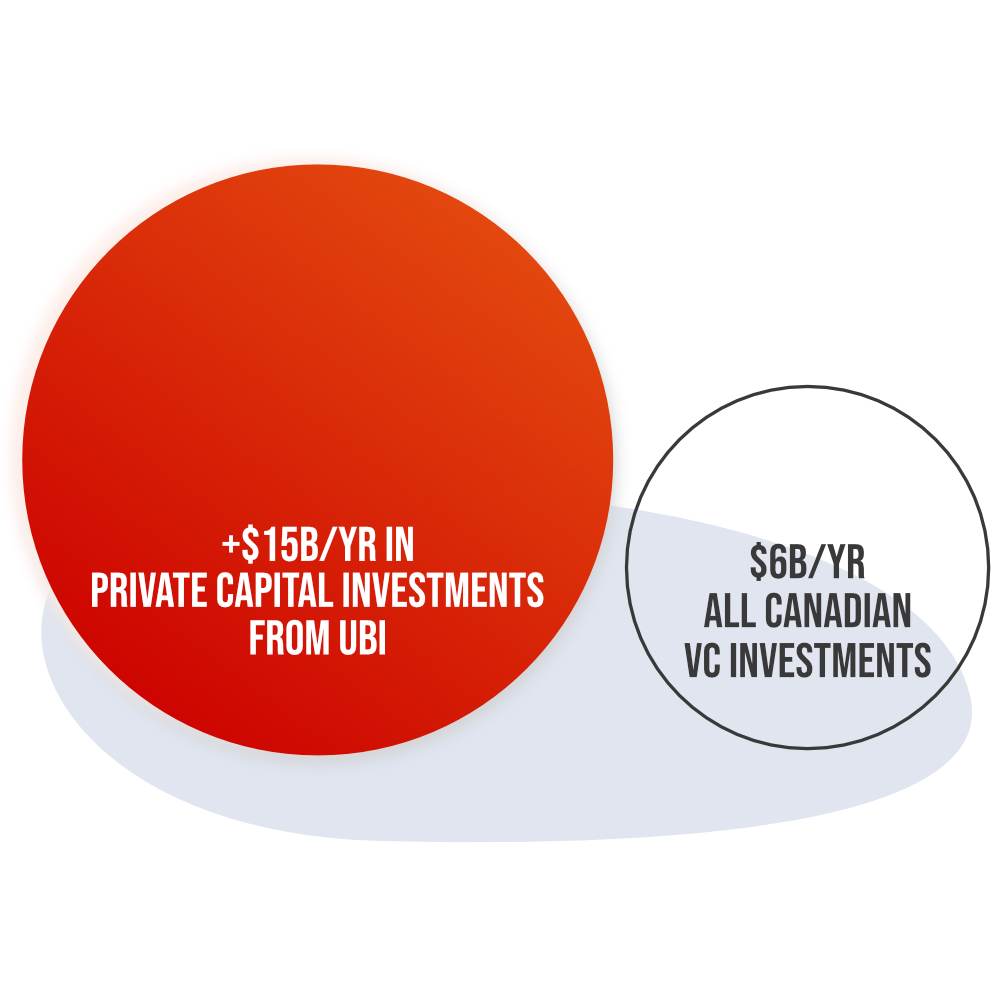 2. Basic Income can be good for business.

3. Basic Income is a raise for working Canadians. 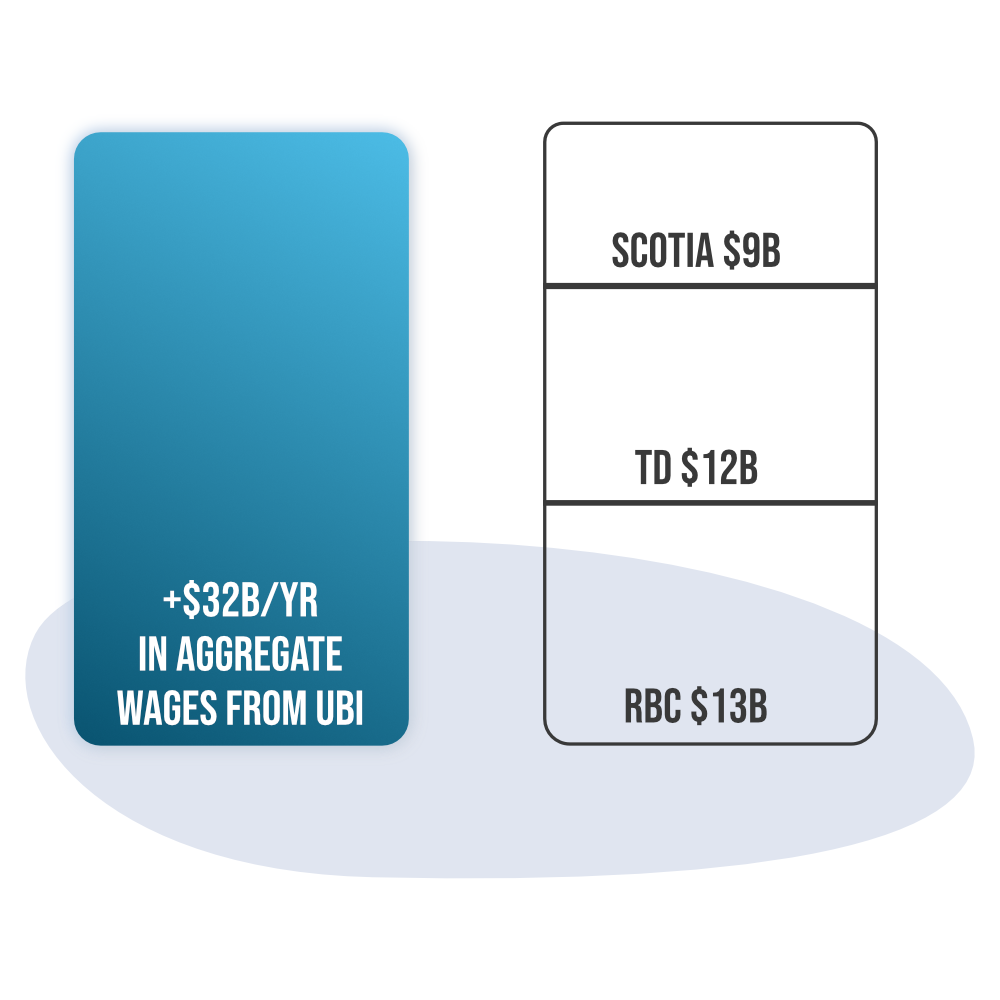 Economic activity from Basic Income would cause businesses to hire, spending up to $32 billion a year in total wages— as much as the profits of our top 3 banks. 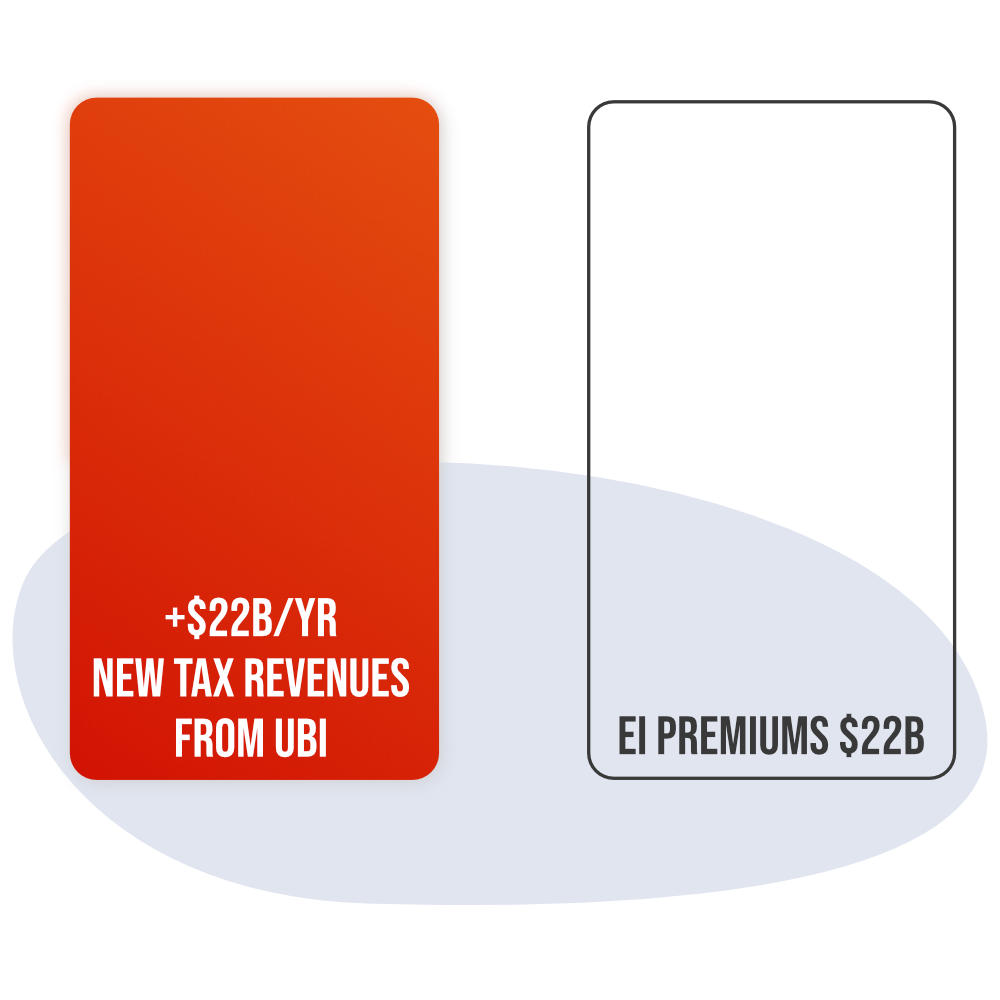 4. Basic Income can be a self-sustaining investment.

Basic Income could grow the economy more than it costs in the long term, making this a sustainable investment over time. It could generate $22 billion a year in new government revenues from new economic activity— as much as all EI Premiums paid by employees and employers.

5. All while ending poverty and growing the middle class. 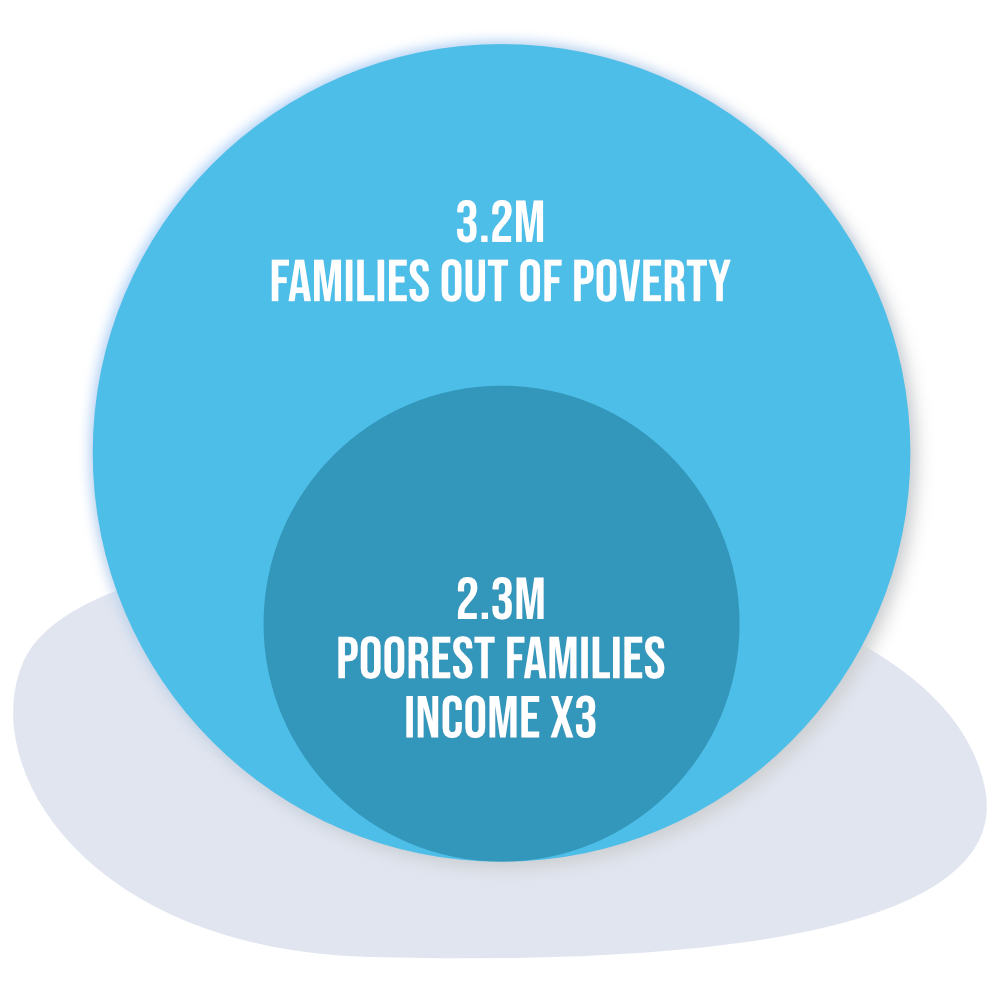 Basic Income could grow the economy sustainably while lifting 3.2 million families out of poverty and giving a raise to most Canadians.

Read the full report and highlights

Basic Income can grow the economy and create jobs.

Basic Income can be a self-sustaining investment.

Basic Income could generate $22 billion a year in new government revenues — more per year all EI Premiums paid by employees and employers.

Basic Income is a raise for working Canadians.

Basic Income could grow disposable income by $122 billion in 1 year for the bottom 60% of Canadians — more than the GDP of Canada’s restaurant industry.

Basic Income can be good for business.

Basic Income could grow Canadian businesses by $32 billion a year in gross operating surplus — more than the yearly profits of our 3 biggest banks combined.

All while ending poverty and growing the middle class.

Basic Income could grow the economy sustainably and support Canada’s businesses — all while lifting 3.2 million families out of poverty, ending poverty.

Sign up to receive the latest news and updates on UBI!

Sign up to become a Backer & Believer of Universal Basic Income! Receive news and updates about UBI Works straight to your inbox.