Canada has a national-scale unconditional basic income in place for people with children, it is called the Canada Child Benefit. It’s good for families and it is good for the economy. This new paper released Sept 19, 2019 by the Canadian Center for Economic Analysis shows us how it works. 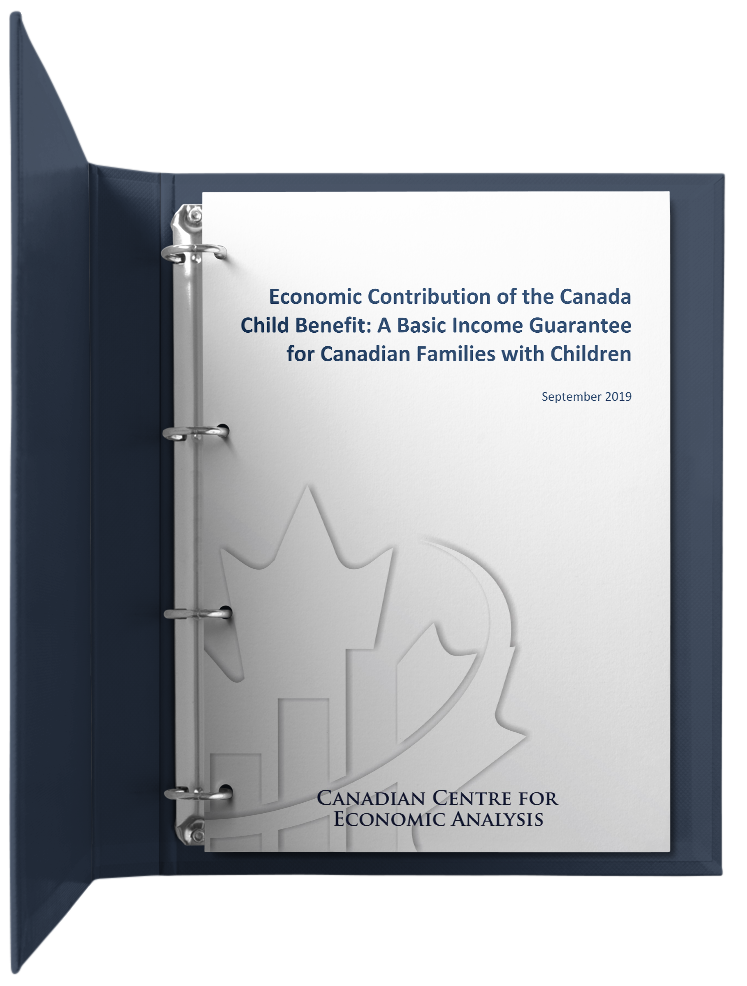 Economic Contribution of the Canada Child Benefit: A Basic Income Guarantee for Canadian Families with Children
Download the report

Key Highlights From The Report

The Canada Child Benefit is a Basic Income for Families, which:

Can be said to provide economic stimulus to the Canadian economy while supporting families with the cost of raising children. This contribution is significant in terms of GDP and employment, and the program may yet prove to have longer-term socio-economic benefits on the future population. In the shorter term, it can already be said to alleviate poverty, enabling more families to reach the middle class.

Canada's Basic Income for Families Has Bolstered the Middle Class

CCB recipients include over 2M families with 3.7M children between them are in families whose pre-CCB income is over $50,000.

CCB shifts median incomes for families with one child up by almost $4,000 / year and families with four children up by nearly 19,000: 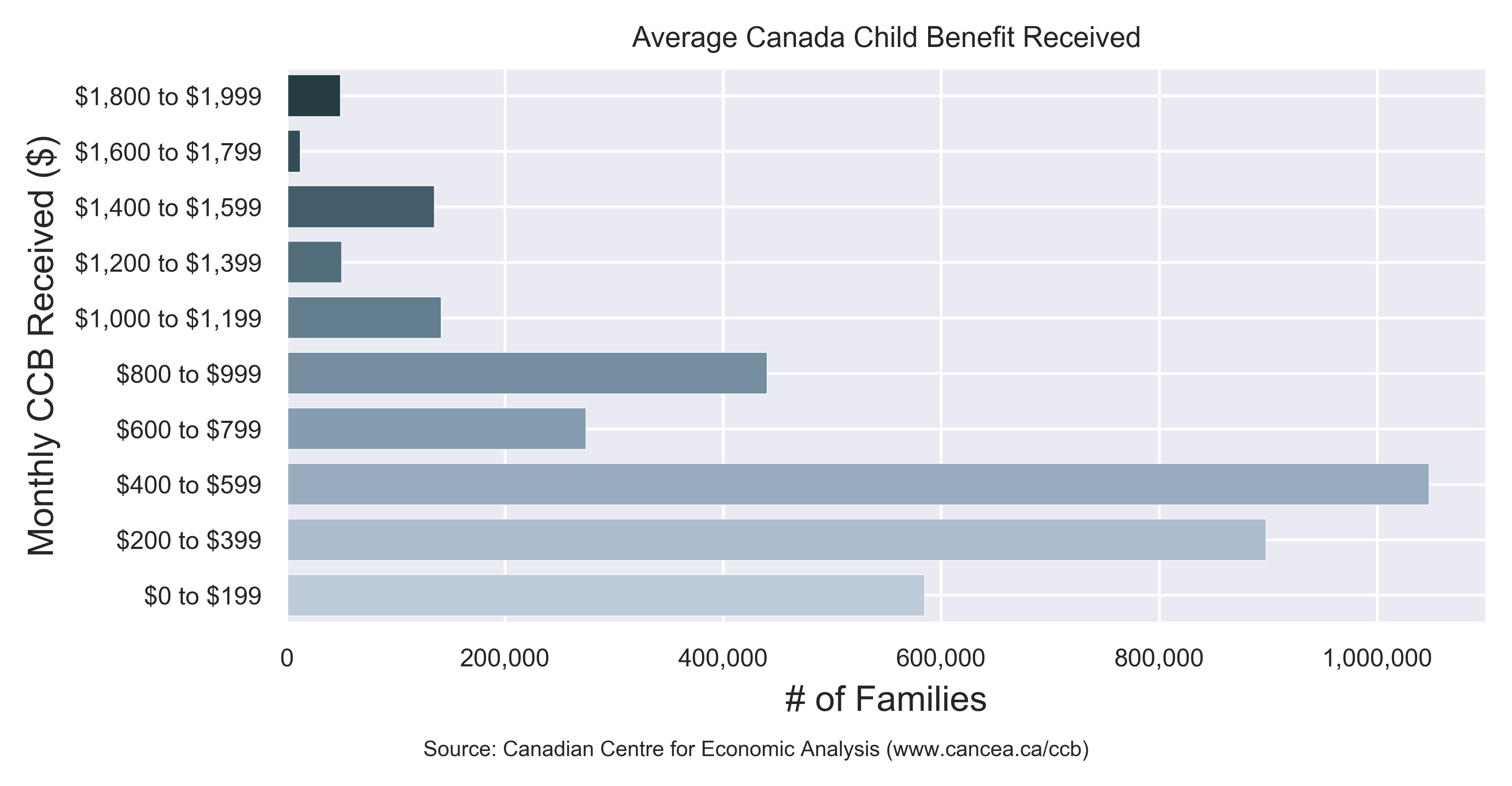 “The CCB provides a more financially secure environment for these children and increases their chances of growing up in a family where their basic needs are met.”

Canada's Basic Income is Good for the Economy; It is an economic stimulus

CCB has contributed $139 billion to Canada’s GDP, with an annual contribution ($46 billion) equivalent to the total GDP of Nova Scotia

Without the CCB, the Canadian economy would be $46 Billion dollars smaller every year.

“Families who receive CCB income contribute economic activity by spending this additional income according to their needs. In so doing, they increase the demand for certain goods and services, which creates ripples throughout the economy through indirect and induced effects.” – Page 7 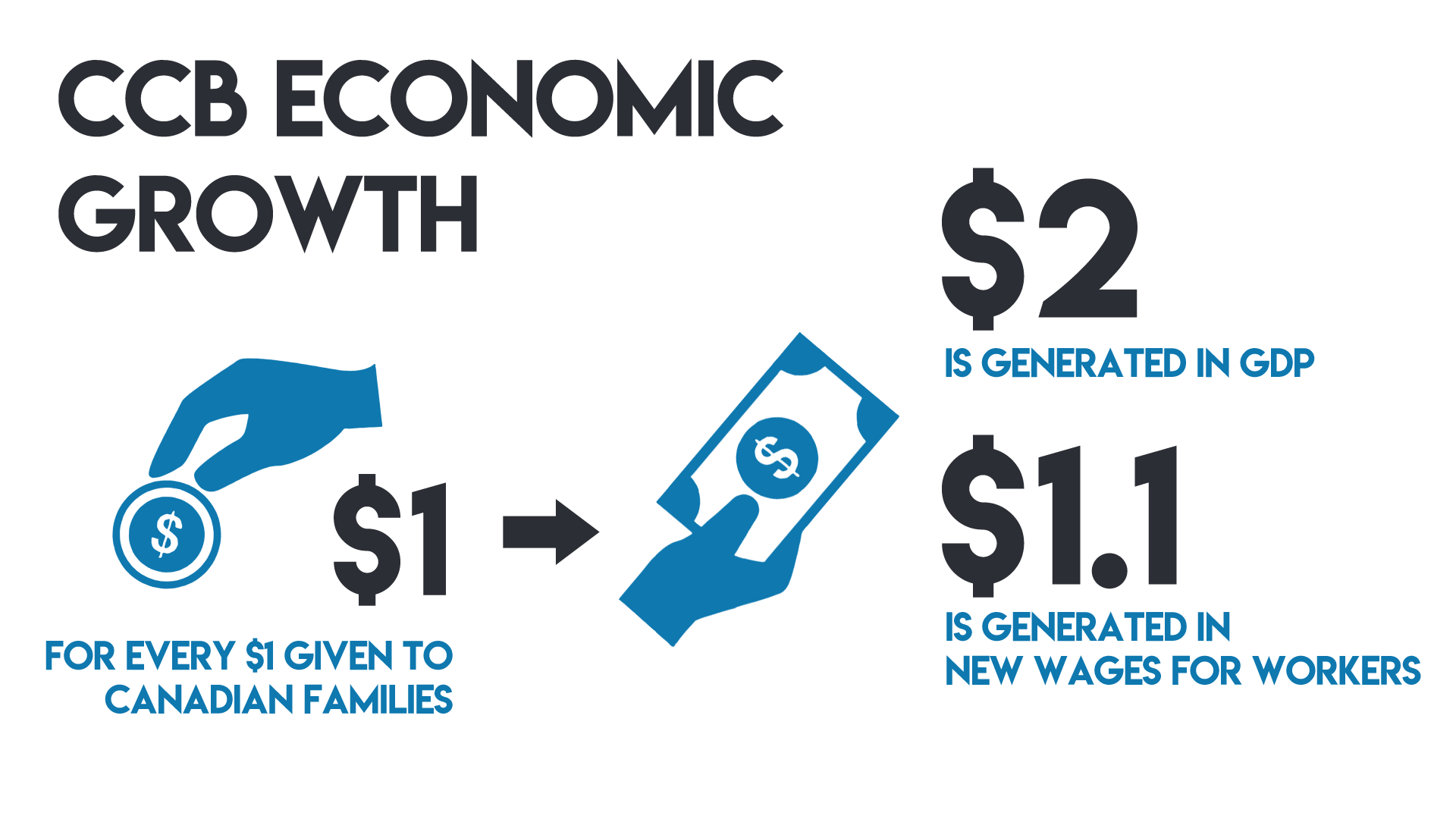 That’s $4 of GDP is driven for every dollar it costs!

These results are well in line with the Bank of Canada’s estimation that the CCB added 0.5% points to economic growth in 2017 (Poloz 2017).

“The CCB generates government revenue through the consumption tax on all additional goods and services purchased by CCB recipients and their inputs, as well as through corporate and income tax paid on the revenues and wages supported by the CCB. This means that although the federal government finances the CCB, a portion of this expense is recovered.” – Page 31 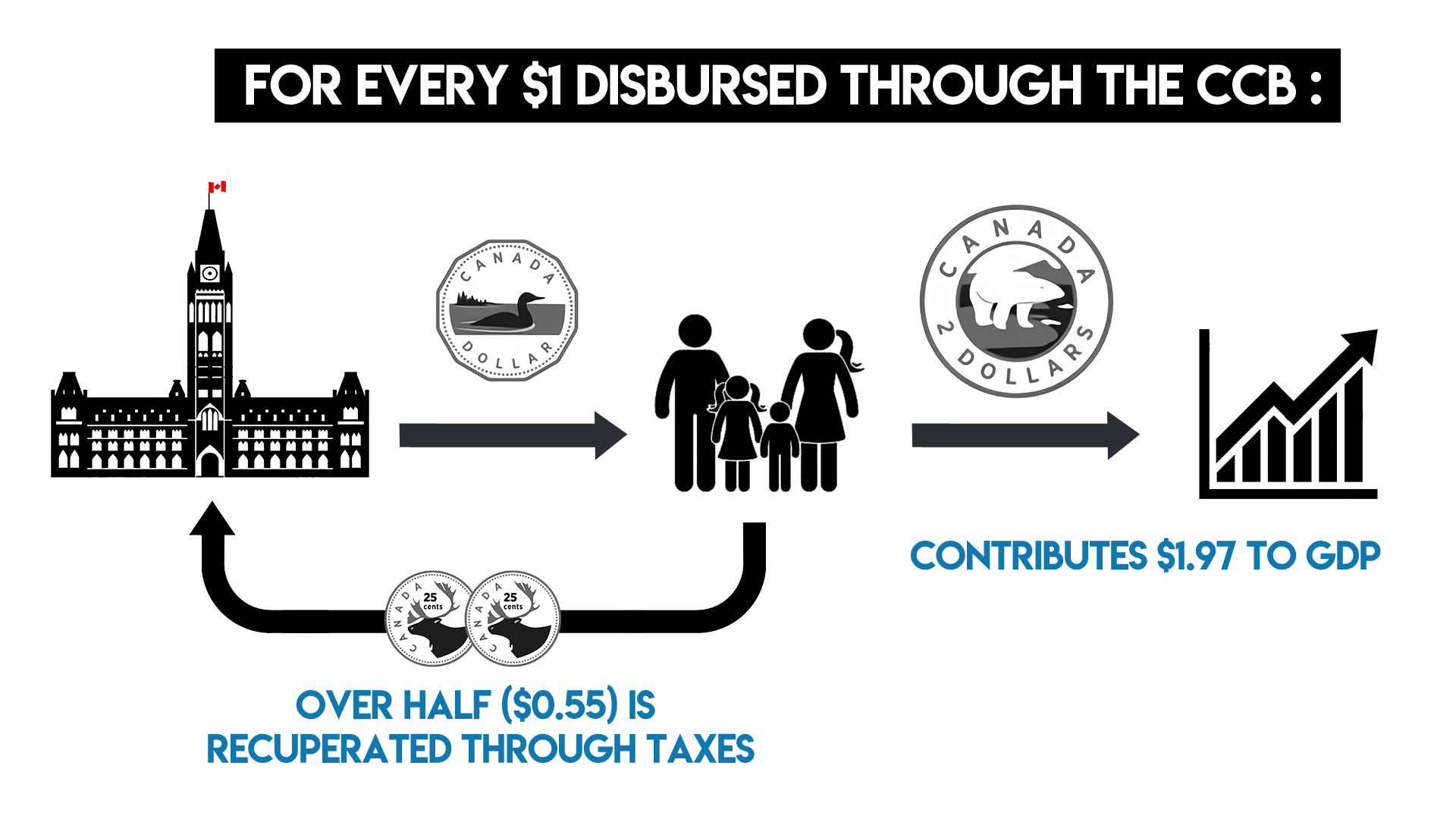 “For every $1 disbursed to Canadian families through the CCB, over half ($0.55) is recuperated through taxes, $0.30 to the federal government and $0.25 to provincial governments.” – Page 8

Cost savings due to decreased crime and improved health have been found in other basic income pilots. For example, during the Basic Income experiment in Dauphin, Manitoba in the late 1970’s, an 8% decrease in hospitalization visits was measured.

The report from Cancea highlights:

Early investments in childhood education and health can have longlasting positive effects on health, well-being and earning potential, which can improve long-term economic productivity and lessen future strain on government-provided services such as healthcare.

“All industry sectors are supported to some degree by the stimulus generated by the CCB.” – Page 29

“To fulfil the larger demand generated by the CCB, some businesses require more staff and workers, for example, additional store clerks, truck drivers, and supply chain managers. The industries and sectors of the economy which benefit the most from CCB-induced spending depend on the expenditure patterns of recipient families.”

People know how to invest their Basic Incomes wisely

“In Canada, according to the Office of Consumer affairs 2011 surveys of spending patterns, low-income families spend most of their income on necessities, namely food, shelter and clothing. In addition, the survey shows that spending patterns differ between lone-parent and dual-parent families. Dual-parent families report higher expenditures on computer equipment and internet services, and since they are more likely to own a home and to have a mortgage, also report spending more on financial services. Lone-parent families are on average less likely to have durable assets than double-income families and therefore report higher expenditures on services such as laundromats and taxi transportation.” – Page 28

“A guaranteed income for families with children also has potentially large long-term effects on population health, educational success and earning potential. Related studies have consistently shown that child benefits increase physical and mental health outcomes and promote healthy development in children whose parents receive child benefits. These positive effects are amplified if families receive benefits earlier on in their children’s lives. Many also find that child benefits increase educational achievement. In the long term, the CCB may, therefore, contribute to economic growth by reducing healthcare costs and increasing the productivity of the workforce, and promote a healthier, more upwardly mobile population.”

Share this key highlights page if you want to see a basic income in Canada! We need to share the findings that a basic income is good for the economy, so that in years to come we’ll be talking about #basicincome with the right facts!

UBI letter to your representative

Send an email to your local MP, MPP, and MP Candidates

Why We Should Have Full Basic Income In Canada

Canada’s Basic Income for Families has had a massive impact on reducing child poverty, look below and notice the shift in # of children toward the right of the graph because of the CCB. 588,00 children now are kept above poverty thanks to the CCB.

1.4M children still live in poverty (market basket measure) in Canada even with the Canada Child Benefit in place, that’s the mid-blue in the chart below.

A full basic income for every individual adult in Canada, would eliminate poverty and grow the economy. It is a program that insures mutual prosperity for all. 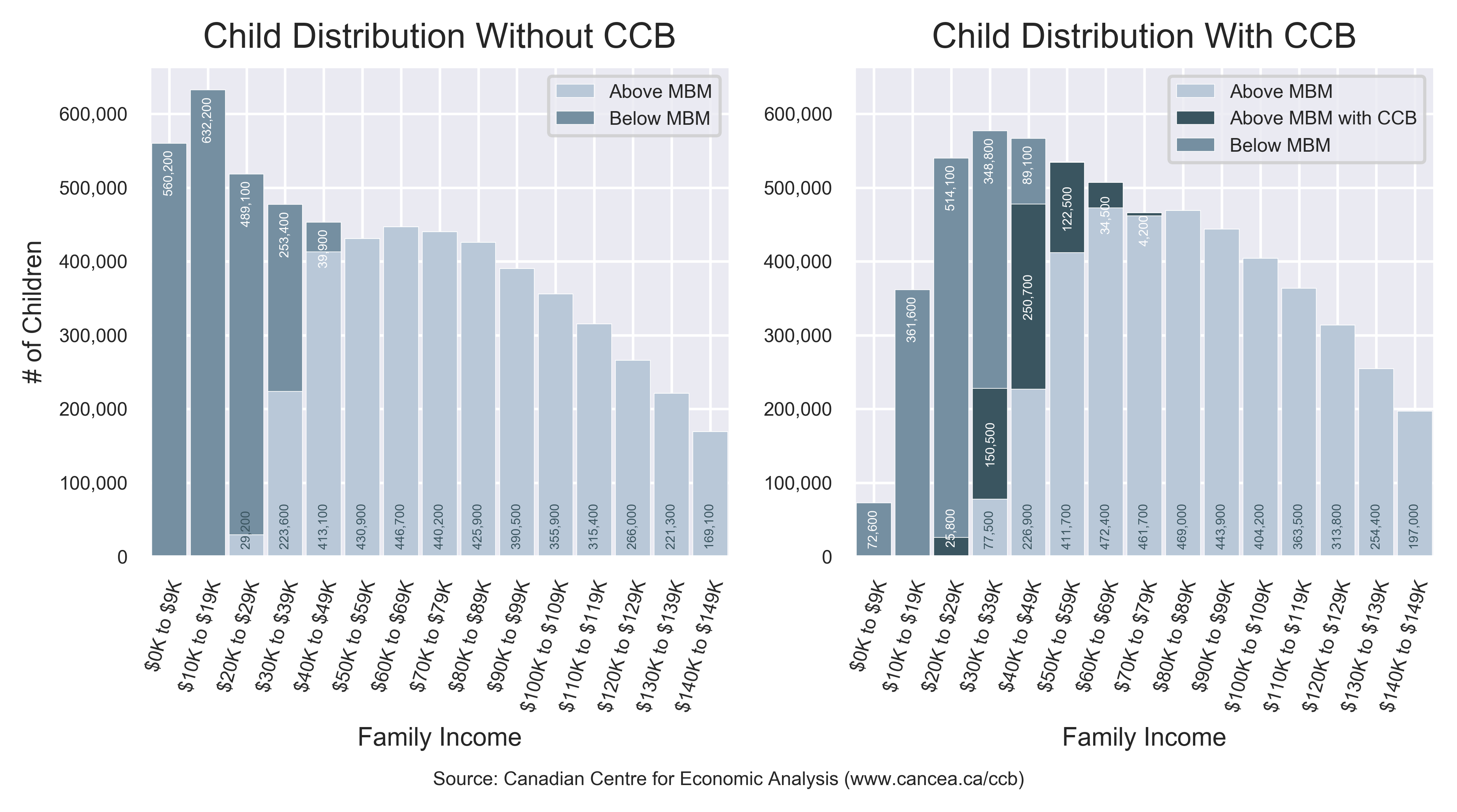